As well as producing toe-tapping shows like the upcoming Madagascar Jr – A Musical Adventure, Rotorua Musical Theatre provides mentoring for youth interested in following a career in the performing arts.

Eighteen year old Joshua McGrath has been dancing for over 13 years and with roles in Shrek Jr and Mary Poppins, feels very at home on the stage.

As playing one of the lead roles of King Julien, Joshua also has a passion for the production side of performances which led to him taking on one of the biggest challenges of his career as sole Choreographer for Madagascar Jr.

“I was a bit daunted at first but excited by the opportunity. The music is upbeat and offers great potential for choreography.”

“To see dance moves that I have created performed together on the big stage is an amazing feeling. Playing a lead and choreographing was a juggling act, but it was so much fun and I have loved every moment”, says McGrath.

This was Josh’s first time as choreographer for a professional musical and he received great support from the experienced Rotorua Musical Theatre team.
“They worked through every step with me, gave great guidance and were very generous with their knowledge and experience”, says McGrath.

Rotorua Musical Theatre is committed to providing mentorship to local youth interested in all areas of theatre.

“We recognise the talent and skills that youth have and understand we have a duty to share our knowledge with the younger generations. They want to, and are very capable of making an enormous contribution. Community theatre is the best training ground for them to get real experience” explains Rotorua Musical Theatre Director Nastaha Benfell.

As well as supporting Joshua as Choreographer, Rotorua Musical Theatre have introduced a mentoring programme to encourage and nurture students in the key roles of Director, Production Manager and Stage Manager. Kira Lees (Assistant Director), Jessica Fenwick (Assistant Production Manager) and Mikayla Heasman (Assistant Stage Manager) have worked alongside managers and gained valuable insight into what is required to put on a production of this nature.

“It was a great opportunity for me to learn more of the production side of things and has been a privilege to work with the amazing cast and crew. It’s going to help next year as I start at Toi Whakaari studying a Bachelor of Performing Arts in Wellington”, says Mikayla Heasman. 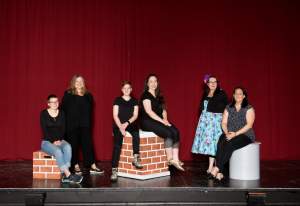 'The Rotorua Musical Theatre works tirelessly to create impressive opportunities that allow our rangatahi opportunities to shine in performing arts. Madagascar will be no exception to that!’, says Miss White.

Based on the smash DreamWorks animated motion picture, Madagascar – A Musical Adventure JR follows the well-known characters Alex the Lion, Marty the Zebra, Melman the Giraffe, Gloria the hip Hippo and the hilarious, plotting penguins, as they escape from their home in New York’s Central Park Zoo and find themselves on an unexpected journey to the madcap world of King Julien’s Madagascar.

More than 58 children (ages 10 – 18 years) will play the outlandish characters in the shows that will run from 10 – 20 January 2019 at the Rotorua Energy Events Centre.

Madagascar – A Musical Adventure JR tickets are on sale now from Ticketmaster.co.nz or from the Box Office at Energy Events Centre, Rotorua. Vouchers are available for Christmas gifts. Adults: $20, Child: $15 or Family: $60. Booking fees apply.