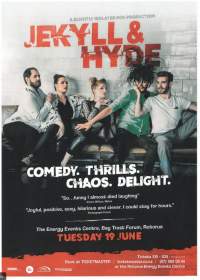 Ticket prices range from $15 for youth to $35 for adults. Discounted tickets for group bookings of 6 or more.

Meet the most delightfully evil man alive, Mr Hyde. A man so evil he punches the cleaning lady, drop-kicks a precious kererū and yells ‘shark’ at the beach.

This bonkers rendition of Robert Louis Stevenson’s classic novel, Jekyll and Hyde is retold by a team of charmingly ‘French’ performers with the help of the audience.

Gather up your friends, lovers, and distant cousins, and prepare to unleash your inner monster!

“...a high-octane, overly-charged show that defies many conventions of theatre” – Dominion Post.

“Joyful, positive, sexy, hilarious and clever. I could stay for hours.” – Pantograph Punch

In Rotorua this month! Loads of activities to keeps kids busy during Easter & the School Holidays, ANZAC commemorations, and lots of sporting and dance events! Find out more in April's Events and Venues newsletter!

If it’s a brass instrument, why does it look silver? And highly polished at that. The French horn is visually glamorous, sublime to listen to, and demanding of a performer with supremely polished skill.

Enter the young, sassy and brilliant Samuel Jacobs, arguably one of the best in his trade. Samuel is Principal horn of the New Zealand Symphony Orchestra, and has made numerous commercial recordings for the film, television, gaming and pop industries. Opus Orchestra is thrilled to have him performing the Strauss Horn Concerto No. 1 with them.

French horn tone ranges from mellow and sonorous to velvety soft and brilliant. Which returns us to the question of colour.
Horns come in both brass and silver actually – sometimes the brass is plated with silver which tends to produce a brighter sound.

So, does Jacobs choose brass or silver? Come along and find out.

The dramatic stage set design being used for Mary Poppins – The Broadway Musical has become a talking point since the show opened.

The show is now into its last week and those who have enjoyed it to date are agreed that alongside the talented cast, the versatile and dramatic stage set is world class.

Designed by one of New Zealand’s most respected theatre designers, John Harding, the set evolves from a grand living room to the rooftops of London, and from cosy children’s bedroom to opulent park. 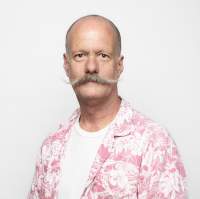 Harding designed the creative yet compact sets for the New Zealand Musical Theatre Consortium’s tour of Mary Poppins which began in Invercargill in 2016. Since then the set has been brought to life in more than six regional theatres to rave reviews.

Visiting from England, Gwyn Harris attended the show with friends and was amazed by the whole production.

“This was on par with any West End show I have been to. The singing was top class and the stage and lighting made it magical,” said Mrs Harris.

Having won many theatre and film design awards, Harding has also worked with Weta Workshop on The Lord of the Rings and The Hobbit, as well as Peter Jackson’s King Kong and James Cameron’s Avatar.

Rotorua Musical Theatre President Natasha Benfell says those who haven’t yet attended the Rotorua production may not realise it isn’t just a home-made set.

“This is a professionally made set, designed by John Harding who has a huge string of film and TV credits to his name,” says Mrs Benfell.

“With only four more performances in this limited season, I would say to people – don’t miss out.”

Fourteen Rotorua children are getting ready to hit the stage this weekend as part of the cast and crew for Mary Poppins – The Broadway Musical.

Following a series of auditions last year students from several local schools, including John Paul College, St Mary’s Catholic School and Rotorua Intermediate were chosen to perform onstage or work behind the scenes on Rotorua Musical Theatre’s production of the Disney classic. 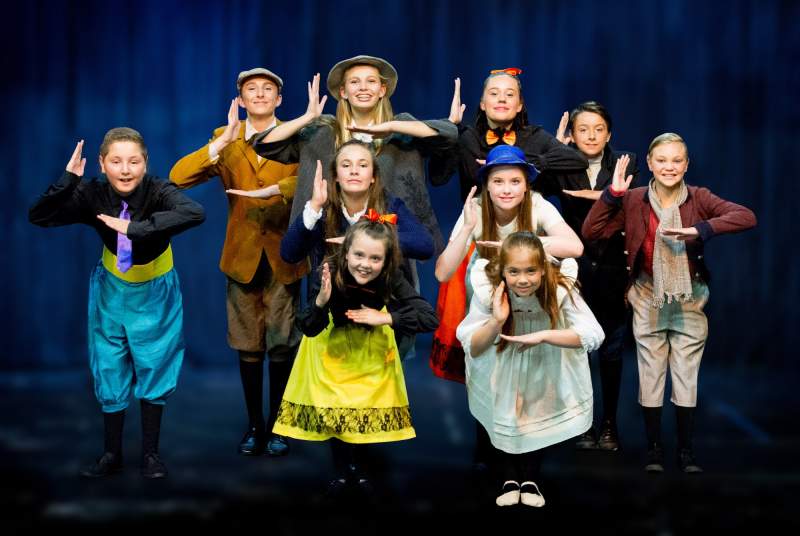 “The best thing was working with a huge adult cast for the first time. The talent is crazy and makes me want to work so much harder. I can’t wait for the shows to begin,” says Samantha.

During the past two weeks Rotorua children have been given the opportunity to win a VIP family experience to the opening matinee by completing a colouring competition. More than 220 entries were received and judges chose their favourites from the two age categories. 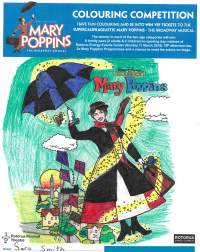 “I really wanted to see Mary Poppins and I can’t believe I have won! I am looking forward to getting photos with the cast” said Lotti.

This limited season of Mary Poppins – The Broadway Musical will offer 12 shows at the Rotorua Energy Events Centre between 11 - 24 March 2018. A range of seating and family concessions are available through www.ticketmaster.co.nz

Tickets are now available for Mary Poppins - The Broadway Musical!

How to buy tickets

Tickets are now on sale from Ticketmaster or in person at the Energy Events Centre, Queens Drive, Rotorua.
But Tickets online here

Table catering at the show

If you are seated at a table there is a great range of food platters available to order in advance. To order email ticketing@rotorualc.nz at least 3 days prior to the show. Menus are below.

Table service will be offered during the show with a limited food menu. A range of alcoholic & non-alcoholic beverages will also be available. And the Energy Events Centre Kiosk will be open during the interval.

Those seated in the Grandstand will be able to purchase snacks and drinks from the Energy Events Centre Kiosk.

The Kiosk menu including pricing is here:
Mary-Poppins-Kiosk-Menu.pdf

For more information on catering or the show email ticketing@rotorualc.nz or check out the Mary Poppins Facebook Page.

A partnership between Compass Group at the Energy Events Centre and NZMA is a winning collaboration!

A partnership between Compass Group at Rotorua’s Energy Events Centre and education provider NZMA is very much a win-win-win!

“We began working with NZMA in 2017 as one way to support students and for them to gain valuable real-life hospitality experience,” says Operations Manager Steve McClay, adding that Compass has always worked with education providers to enable future hospitality ‘stars’ to grow and learn. 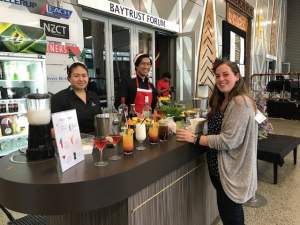 “This is a vital partnership. While it supports NZMA and its students, it also benefits Compass and our client. The students bring a lot of enthusiasm, energy and creativity to the functions and events we hold at the centre, providing guests with a memorable experience each time they attend our events." 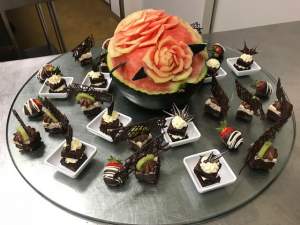 Compass Group are able to cater for intimate dinners for two through to functions for 2000 plus. They can provide a fully customised menu for events either at the EEC or at one of Rotorua's stunning off-site locations. Contact Steve to cater your next event.

Read the full story on the Compass Group website 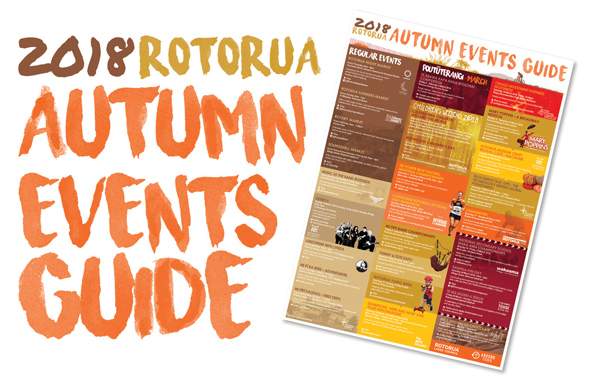 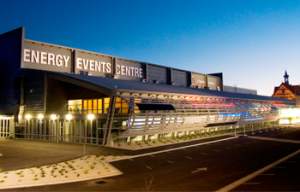 A three-day national symposium, expected to attract more than 600 delegates and bring up to $900,000 in spending, is the latest event secured for Rotorua.

Latest figures show multi-day conferences to Rotorua grew by 2 per cent to 79,324 delegate days over the last year, compared to a national downturn of 17 per cent.

It is the first time the conference has been held in the regions, reflecting Infrastructure New Zealand's current focus on regional economic development.

Infrastructure New Zealand project director Sarah Lang said she was impressed by the co-ordinated approach of all Rotorua providers and that played an important role in deciding the conference destination.

"The programme for the 2019 Symposium highlights the importance of provincial towns and cities in the future growth of our country. We are looking forward to bringing delegates into Rotorua to experience all it has to offer."

Lang has been working alongside the Energy Events Centre business events team for the last three years to confirm the booking.

Energy Events Centre manager Joelene Elliott said the Infrastructure Symposium had grown over the years and there were very few venues that could comfortably host such a large conference.

"Conference organisers talked about the flexibility of the space, coupled with the great options for accommodation and activities around the city," Elliott said.

"Our team has worked extremely hard to secure this conference, and they are elated."

Destination Rotorua chief executive Michelle Templer said winning the bid to host the Symposium was a major coup for the region.

"Infrastructure is a critical component of economic development so it is great that Infrastructure New Zealand have brought the convention to a regional centre."

In Rotorua this month! Mary Poppins is in town, competitions in kapa haka, mountain biking, touch and NZ pipe bands Championships.. plus lots of FREE activities for kids with Children's Day and Parks Week!

Read the latest Events & Venues What's On Newsletter for March 2018 to find out more.

A print friendly version of the newsletter is available here:
Print March 2018 What's On Newsletter